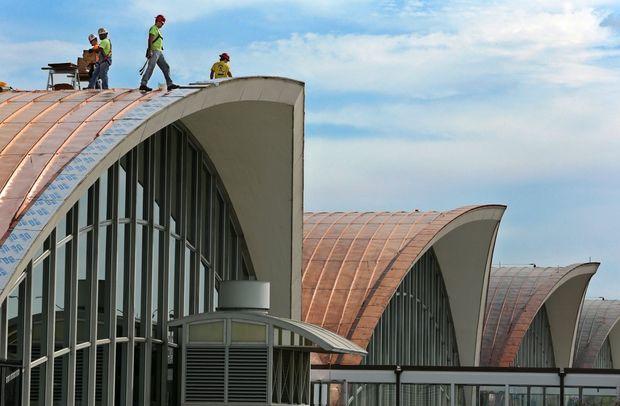 ST. LOUIS • As Bill Miller stepped out of a cab on Monday afternoon at Lambert-St. Louis International Airport, he paused to examine the shiny new roof over the check-in area at Terminal 1. “Looks like a new penny,” Miller said, before rushing to catch a flight. If Miller, of Dallas, were to return to St. Louis in a year, he might not recognize the copper top on the terminal’s famed vaulted concrete roof. By then, the metal is expected to have turned a burnished brown, one of about a dozen color stops on an odyssey of oxidation that, in 25 years or so, is destined to end in a soft-green patina.

Workers have installed the solid copper roof on three of the terminal’s four distinctive domes that were designed by Minoru Yamasaki and completed in 1956. The re-roofing is expected to be completed by year’s end. “The previous roof was also made of copper, and it held up pretty well,” airport spokesman Jeff Lea said Monday. “At 60 years old, it was well past its life expectancy. And it did have leaks. A cost-benefit analysis found that it was too hard to maintain and its life had expired.” The $6.7 million replacement is part of a $70 million face-lift at the airport.

The roof work started in April when the old copper covering was removed, along with insulation and a subdeck of rotting wood. The new material is called CopperPlus. It was developed by Heyco Metals and features a core of stainless steel that is metallurgically bonded with two layers of copper. “It’s a high-tech, architectural metal that we expect will outlast the previous roof,” Lea said. Builders Service Inc., a subcontractor of Kozeny-Wagner Inc., is doing the work. The terminal joins a couple of other landmark copper roof jobs completed in recent years. In 2010, the Old Courthouse downtown got a bright new copper top at a cost of $3.9 million. This year, the copper-covered steeple of the Old Cathedral, nearby, was replaced as part of $12 million restoration.

“Copper is expensive,” Lea said. “But we wanted to stay true to Yamasaki’s original design. Copper is part of the terminal’s historical features.” Indeed, Terminal 1 is iconic among airports worldwide. Its sweeping splendor led Architectural Forum magazine to call the terminal the “Grand Central of the Air.” In the 2009 movie “Up In the Air,” actor George Clooney’s character, Ryan Bingham, salutes Lambert and its architectural beauty. “The Wright brothers flew through there,” Bingham says. “That domed main terminal is the first of its kind, it’s a precursor of everything from JFK to de Gaulle. “Pretty sweet.”