Why retractable roofs are less advantageous for football stadiums

Retractable Roof NFL Venue Makes Little Sense for St. Louis  Of late, I have heard from or read of a lot of St. Louis Rams fans and St. Louisans in general who have shared their opinions on whether they would prefer a new open air NFL venue or a retractable roof stadium. Although the argument will not determine what type of facility ultimately comes to pass, it is interesting to look at why retractable roof venues may not be as appealing as many would assume, particularly when considering the situation at hand in the Gateway City.

According to this report via Tim Tucker of the Atlanta Journal Constitution, 66 percent of all games played within retractable roofed NFL facilities through the 2012 season were played indoors. In short, teams with retractable roofed home fields chose to play two of every three contests inside when they had the option of playing them in an outdoor setting. During the past two NFL seasons, however, the four teams with retractable roof stadiums -- the Arizona Cardinals, Dallas Cowboys, Houston Texans and Indianapolis Colts -- have collectively chosen to keep their respective lids closed for 81 percent of their regular season and postseason home dates, up from the aforementioned 66 percent figure through the 2012 docket. In the desert of Arizona, the Cardinals kept the University of Phoenix Stadium's roof shut 80 percent of the time during the past two years. The Big Red did not remove the roof a single time this season after having opened it twice during the preceding campaign. In Dallas, the Cowboys kept the top of AT&T Stadium closed for nearly 95 percent of home contests during the the last two seasons. In 2013, America's Team did not open the roof a single time. This year, the Cowboys have allowed the beautiful outdoors of Texas to shine forth onto their gridiron on just one occasion. In Indianapolis, the Colts closed the roof of Lucas Oil Stadium for nearly 73% of all home games during the past two years. They opened the roof just twice in 2013 before pulling the top back on three occasions in 2014. Finally, the Texans kept the ceiling of NRG Stadium closed in Houston for nearly 69 percent of their home match-ups during the past two campaigns after keeping their roof shut during all of their home regular season/postseason affairs in 2012.

Retractable Roofs Add Significant Expenses  According to Mark Waggoner of the Houston-headquartered Walter P. Moore engineering firm -- the firm who designed the roofs of all four of the NFL's current retractable stadiums --a retractable roofed edifice costs $100 to $150 million more than an open air venue and $25 to $40 million more than a domed football facility. When considering the fact that these structures are being opened less and less frequently as evidenced by the above section, one would have to ask if the fees that come with such a roof are worthwhile, especially in St. Louis where their is already a dome in place that could be utilized year round for all indoor/fall/winter sporting events and conventions if the Rams were playing elsewhere in a complementary outdoor venue. 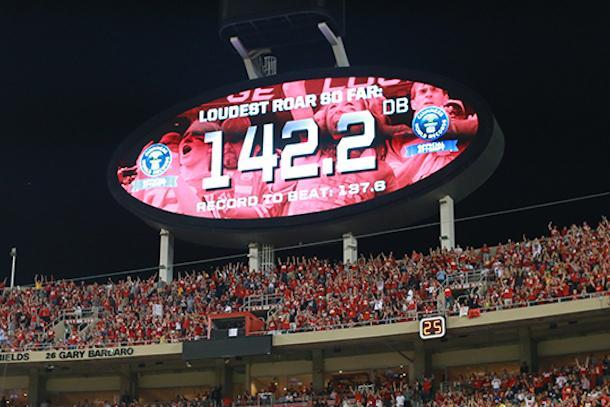 Loudest Venues in NFL Do Not Have Roofs  Although it is almost a certainty that the eight domed/retractable roof facilities around the league hold crowd noise a little better than their open air counterparts do, it is notable that the two NFL facilities that have set Guinness records for volume at a sports stadium were both open air structures: Arrowhead Stadium in Kansas City and CenturyLink Field in Seattle. The reason for bringing up this point? Fans can make a whole, whole lot of noise in the NFL, regardless of whether a game is played inside or out. During league history, there have been plenty of outdoor venues like those mentioned above that have been among the loudest stadiums in the league as well as indoor venues like the Edward Jones Dome during the Rams glory days that have been deafening. In short, the single most critical component in regard to NFL stadium volume is the fans in a particular venue, not the particular venue that the fans are in. If and when a new open air venue arises in St. Louis, Rams fans can make a whole lot of noise outdoors just as they have inside, as has been well-proven by their NFL fan comrades across-state in Kansas City.

The Answer for St. Louis  In December, Governor Nixon told Bernie Miklasz of the St. Louis Post Dispatch that "repurposing" the the dome/convention center to enhance it and make it more attractive while a new venue is being built elsewhere would be one of the key aspects involved in the coming Dave Peacock/Bob Blitz spearheaded stadium proposal. With an upgraded dome in the region, the metro could continue to host indoor sporting events and conventions while having a better opportunity to land a higher quality and quantity of events in the future. And with the Rams out of the dome and in a new outdoor venue, the dome/convention center would be freed up for prime convention dates from August through January which would enable bookings there to be maximized. With both a spruced up dome/convention center and six more months of activities being possible there, a real opportunity to at least double the annual revenues that the facility generates would be realized. On the other hand, building a retractable roofed stadium instead of an open air edifice would essentially serve as a direct competitor to the current building. That, of course, would not be advantageous to the region and would essentially deem the dome obsolete. Constructing a top-tier NFL/MLS compatible outdoor venue, though, would give the region a world class site for two professional sports franchises and a prime spot for spring/summer outdoor events such as concerts and conventions as well as the possibility of an NHL Winter Classic for the Blues. When considering the fact that retractable roofed facilities are opening less and less for football games, that costs of retractable roofed stadiums are substantially higher, that crowd noise is not necessarily amplified inside as much as some might think and when weighing the specifics of the St. Louis situation and how it already possesses a domed venue that the city and state plan to continue using, there is really little advantage to be gained in St. Louis by building a venue that would compete with -- rather than compliment -- the dome/convention center.