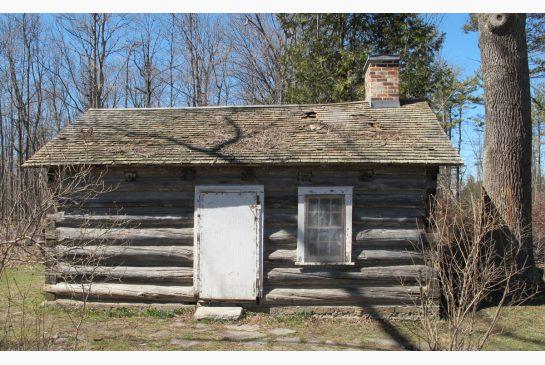 After 225 years, historic log cabin could use a new roof: Fixer

The Osterhout log cabin in Scarborough, Toronto, needs extensive roof work or it may not survive, this piece states. Built in 1795, it is the oldest building in the city. The roof, which has several holes, features cedar shingles.

The Osterhout log cabin, in the Guild Park, was built in 1795 and is the oldest building in Scarborough, but holes in its roof could cause serious damage if not fixed soon.

By: Jack Lakey Staff Reporter, Published on Wed Apr 15 2015
Holes in the roof of the oldest building in Scarborough could do to it what 225 years of weather couldn’t.
The story of the Osterhout log cabin is that it was built in 1795 by Augustus Jones, who was commissioned to survey the original Scarborough township and lay out concession roads and plots of land.
Research reveals that Jones and his men in fact lived in tents, but there is no dispute that it was constructed shortly before the land on which it is located was granted to William Osterhout in 1805.
It has survived along the Scarborough bluffs ever since, occupying land that is now part of the Guild Park, home to the now-closed and crumbling Guild Inn.
The cabin was last occupied by Elizabeth Fraser Williamson, who was for many years the sculptor-in-residence at the Guild of All Arts, and used it as a studio from 1970 to 1995.
The cabin has weathered more than 200 years of wind, rain and snow on the Lake Ontario shoreline, but that could change if its roof isn’t replaced soon.
Dick Winters sent us a note saying he was walking in the park with his wife and could help but notice the holes developing in the cabin’s roof, which is covered by cedar shingles.
“We were very shocked to see this piece of history in this state of decay,” said Winters, who attached a photo of holes in the roof to his email.
“This is city property and it should at least have a new roof to preserve it.”
We went there and found the doors boarded up and the windows covered with Plexiglas to keep out critters and vandals who, it appears, have been trying to perpetrate a home invasion.
Several holes are starting to form in the roof, which will only get bigger and let in rain, not to mention squirrels, raccoons and other pests that could damage the cabin.
After nursing it along for all these years, it would be a shame to allow it to crumble, like the old inn on the same grounds.
STATUS: We’ve asked Nancy Lowes, who’s in charge of Scarborough parks, if there’s a plan to re-shingle the roof, or at least patch it up until it is replaced.