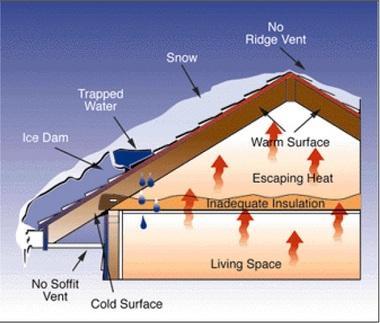 This graphic from the Michigan Committee for Severe Weather Awareness shows how ice dams form on roofs.

LANSING — The massive snow storm and polar vortex that brought subzero temperatures left many Michigan homes susceptible to damage.   Residents should be aware of the possibility of frozen water pipes and roof ice dams, which can occur when heavy snowfall melts and refreezes on roofs, causing water to back up under shingles and seep into the house.

Michigan insurers already have seen a dramatic increase in property and auto insurance claims in the past several weeks, according to the Insurance Institute of Michigan.   "Wind, ice and cold weather contributed to an increase in auto crashes, bursting pipes and fires compared to the previous year," IIM Executive Director Pete Kuhnmuench said in a statement. "Residents are encouraged to take extra precautions to minimize damages from this winter's blast."   Standard homeowners policies generally cover damage caused by burst water pipes and roof leaks. Most policies don't cover sewer and drain backups or flood damage, though homeowners can purchase that coverage.   IIM didn't have specific claim numbers, but said insurers expect to get more claims as temperatures fluctuate.

Flooding could occur if temperatures warm enough to cause a significant melt, warned IIM's Lori Conarton.   "And, although we probably don't want to hear this, there is still plenty of winter left," she said in an email. "That is why it is important to take precautions to minimize the changes of loss due to freezing pipes, roof ice dams and water damage."   The IIM and Michigan-based Fremont Insurance Co. offered several tips to avoid ice dams and frozen pipes, which can burst and cause water damage.

• Clean debris, snow and ice from gutters and down spouts.

• Use a roof rake to clear snow from your roof.

• Make sure your attic is sufficiently insulated and ventilated. Maintaining airflow from under the eaves of soffit area through roof vents helps prevent ice dams. Click here for insulation guidelines.

• If you leave for several days, don't turn your heat down all the way. You also can drain and shut off the water supply (except indoor sprinkler systems).

• Insulate pipes, especially those near outer walls, in crawl spaces, or in the attic. You also can add special heat tape or thermostat-controlled cables to pipes.

• Use caulk or insulation to seal air leaks near electrical wiring, dryer vents and pipes.

• Disconnect garden hoses, shut off and drain pipes leading to outside faucets.

• Keep a trickle of warm water running overnight from a faucet near an exterior wall.

• Open cabinet doors under sinks and appliances near outside walls.   If you discover frozen pipes, Fremont Insurance recommends you shut off the water, call a plumber and your insurance agent, and be aware of potential electric shock in and around standing water. Don't try to thaw a frozen pipe with an open flame or torch.