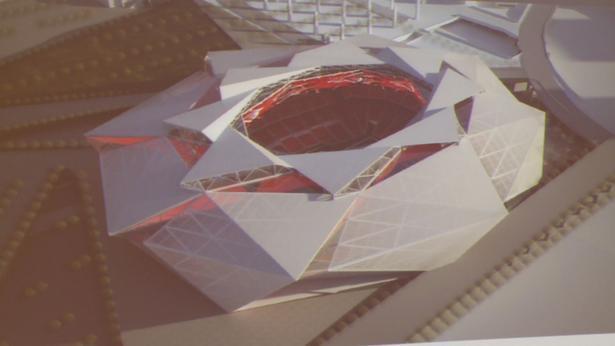 ATLANTA -- The architect behind a new Falcons stadium unveiled new "concept" images of the stadium's design.

"This is primarily an open building that closes instead of a closed building that opens," said Bill Johnson of 360 Architecture, the Kansas City firm chosen to design the billion -dollar retractable roof stadium.

The stadium architect showed off images of an eleven-sided building wedged into the stadium's south site -- capped with an eight-piece roof that twists open and closed like the aperture of a camera.

"The interesting thing is even though we have eight parts, they're much smaller than other roofs out there and they have to go a shorter distance," Johnson said. By comparison, he said the retractable roof at Reliant Field in Houston has three parts.

The stadium's superstructure has a similarly geometric design -- one that uses transparent polymers to allow in urban vistas from the outside. The largest is to the stadium's northeast -- overlooking Philips arena and the heart of downtown Atlanta.

The stadium's backers say the concept can be used at whichever site finally gets chosen, a decision expected by midsummer, or sooner. The city and state are negotiating to buy two churches that currently impede construction on the preferred site south of the Georgia Dome.

"A lot of retractable roof stadiums just haven't been open very often," McKay said. "As good as our weather is, and as good as our environment is, and the fact that we have downtown adjacent to us, we've always wanted that connectivity."

Backers stress that the new images are "concept" designs only, subject to revision. The Georgia World Congress Center Authority board is expected to vote on whether to accept the concept at a meeting Tuesday.