ICE DAM DAMAGE TO YOUR ROOF?

Falcons stadium designer: ‘We really did hit a home run’ 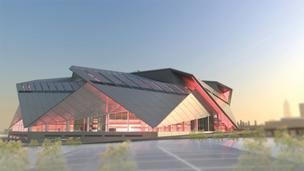 Asked whether he was worried about whether the first-of-its-kind design for a retractable roof stadium would work, Johnson laughed. Quite the opposite, he said. “I’m looking forward to when that roof opens up for the first time,” Johnson said of the eight panels that will travel along octagonal tracks to create an opening to the skies, “The heavens will open up.” More seriously, Johnson said: “I’m not worried at all. We have a great city, and we have a great owner.” Johnson was referring to Arthur Blank, owner of the Atlanta Falcons, who had told the designers he wanted to build a retractable roof stadium unlike anything that had ever been built before.

Bill Johnson, senior principal of 360 Architecture based in Kansas City, Mo., took that task to heart. “Don’t build a building like everyone else,” Johnson recalled being told. “Atlanta deserved the best.” So when competing for the job to design the new Falcons stadium, Johnson presented two alternatives -- including the eight-sided facility with a roof that would open in much the same way as a traditional camera lens opens to take picture. “The ideas that we presented early on that captured the imagination of the franchise owner, the city and the state are still largely in tact,” Johnson said. The eight-sided building will resemble eight wings of a falcon taking flight -- giving the building a sense of motion. Johnson also said Blank wanted the building to have a “dramatic view of the downtown skyline” -- so the architects oriented the stadium so that there would be a “window to the city” by removing seats on the eastern side of the structure.

In addition to the schematic design, the GWCCA board also unanimously approved the preliminary budget for the new stadium, plus a host of legal documents related to the deal. The vote was taken with no discussion among board members. After the vote, Johnson talked about the excitement he and the members of the architectural team share in being able to be part of the new Falcons stadium project.

As he described it, the energy of the stadium will emerge from the center of the building with the video board halo -- a 360 video wall visible to everyone in the building -- and continue through the dynamic opening of the retractable roof. In evaluating his own design, Johnson said: “On the level of expectations, we really did hit a home run.”

How to properly install flashing