The Search for Texas Tornado Survivors

Search for Texas tornado survivors: Some victims 'not even near their homes' 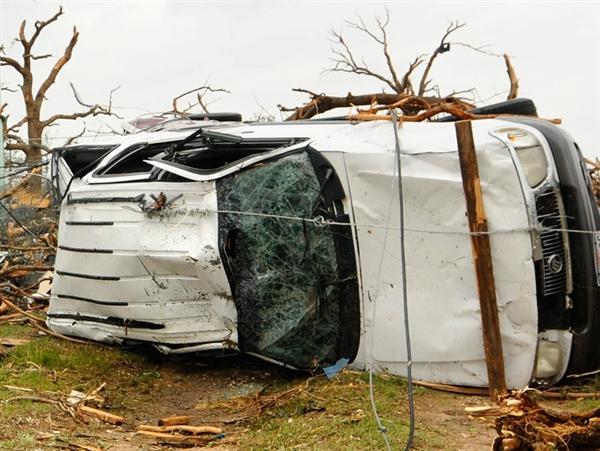 With six people already confirmed dead, rescue crews in a northern Texas town continued their search for victims Friday after a wave of 16 tornadoes crashed through the region, ripping homes to pieces and laying waste to large swaths of the area.

In Granbury, seven people were still missing after an EF4 tornado packing winds up to 200 mph destroyed a neighborhood late Wednesday, the National Weather Service said.

Hood County Sheriff Roger Deeds told reporters that the search for victims had to be expanded because "two of these people that they found were not even near their homes, so we're going to have to search the area out there."

Nearly 100 damaged homes remained off limits Thursday night as crews in the hardest-hit areas continued to a search for survivors and victims.Hundreds of people had checked in with authorities to say they had survived.

The tornado that devastated Granbury, Texas, had winds up to 200 miles an hour and killed at least six people. It was one of 12 tornadoes that hit North Texas Wednesday night. NBC's Gabe Gutierrez reports.The violent twisters flattened homes, uprooted trees, tossed trailers onto cars and left hundreds homeless in north Texas. About 100 people were injured. All of the dead – confirmed to all be adults — were from the Rancho Brazos neighborhood on the outskirts of Granbury where most of the homes were built in the past five years by residents themselves and the Christian charity group Habitat for Humanity. Granbury is a town of 8,000 people about 65 miles southwest of Dallas.

Officials on Thursday night released the names of the dead: Jose Tovas Alvarez, 34, Robert Whitehead, 60, He said that 97 homes sustained damage, from slight to total destruction. Electricity and water were still out to those homes and he said it could be days before residents could return. “With the gas and electricity hazards we’re not going to take a chance in the area,” he said. “It's rough, very rough. Everything's demolished," a resident told KXAS as she rushed away from the neighborhood with her arms around a child.

Texas Gov. Rick Perry, along with other state and local officials, will visit Granbury on Friday.

The National Weather Service in Dallas-Fort Worth said 16  tornadoes were confirmed to have ripped through north Texas.

The tornado that hit Granbury Wednesday night was rated an EF-4 by the National Weather Service, meaning that winds reached between 160 and 200 miles per hour.

It was the first EF-4 in the Dallas-Ft. Worth area since 1994, National Weather Service spokesman Mark Fox said.

The tornadoes seemed to have caused less damage in Cleburne, where Mayor Scott Cain told KXAS. The town did “have the potential for some injuries,” Cain said.

Some witnesses have said the tornado that swept through Johnson County may have been as much as a mile wide. While that twister that hit Granbury was smaller, but it struck a more populated area, according to Fox.

People in the affected areas had a little more than the national average of 13 minutes warning before the tornadoes struck, according to the National Weather Service.