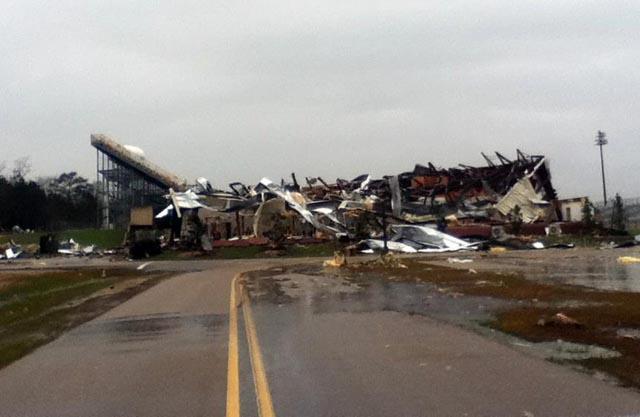 The strong tornado that swept through Hattiesburg and Oak Grove in Lamar County, Mississippi, on Sunday has been rated an EF-4 with 170 mph winds, making it the first violent EF-4 tornado of 2013.
The tornado hit Hattiesburg at 5:12 pm CST February 10, injuring 82 people and causing widespread damage over a 20-mile-long path. Miraculously, there were no deaths.The only other violent EF-4 tornado ever to hit Lamar County occurred on April 24, 1908, according to NWS Jackson. Figure 1. Oak Grove High School football field near Hattiesburg, MS after Sunday's tornado. Damage was rated EF-4 near the high school, and there was clear evidence of the tornado being multi-vortex over a portion of its path.
Image credit: NWS Jackson Facebook page.
The 2013 tornado season is off to an unusually busy start--a pattern we also saw last year. The January 29 - 30, 2013 tornado outbreak now has 56 confirmed tornadoes, including the only EF-3 tornado of the year, which hit Adairsville, GA, on January 30, killing one person. The outbreak is now ranked as the second largest January tornado outbreak since records began in 1950 (the largest: 128 tornadoes on January 21 - 22, 1999 .) NOAA's Storm Prediction Center logged twelve preliminary reports of tornadoes on Sunday,from Mississippi and Alabama. This brings the tally of preliminary tornado reports for the year to 100. On average, we've had just 72 preliminary tornado reports by February 10 during the previous seven years, 2005 - 2011.
Here at ARAC (Alliance Restoration and Consulting) our hearts go out to the families who have lost loved ones during these tragic storms.