If your builder is late delivering your new house, don't be too upset. You are not alone. New home buyers almost everywhere are probably experiencing the same thing. Ditto if you're having trouble getting your builder to come back and fix those sticky doors, loose floor tiles or the dozens of other little nuisances that always crop up in new homes. Builder tardiness is not occurring because they've gone on a massive, countrywide strike to achieve some legislative goal in Washington. Rather, it's simply because they are unable to move as quickly as they once did. The culprit: labor — or more precisely, the lack thereof.

The economic downturn has driven hundreds of thousands of craftsmen and laborers away from housing and into other industries, and they have yet to come back. Indeed, according to the latest survey from the National Assn. of Home Builders, the labor shortage has become "substantially more widespread" since last year, when the housing recovery took hold. "The incidence of reported shortages is now surprisingly high relative to the current state of new home construction," NAHB economist Paul Emrath says in the report. 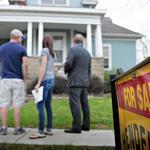 But "the most distinctive aspect" of the survey results is not that there is an uptick in the share of builders reporting labor shortages, Emrath adds. It's "how widespread these shortages are relative to historical experience … and to the current state of the home building industry," which is still struggling to regain its full stride. About 2 out of every 3 builders reported paying higher wages because of the shortage, and almost as many say they have raised their house prices accordingly. Three out of 5 reported difficulty in completing their houses on time; one-third said rising labor costs had made some projects unprofitable; and 9% said they lost or canceled sales as a result of higher labor costs.

On average, builders said their direct labor costs — employees — have increased 2.9% over the last six months, while subcontractor costs increased 3.8% over the same period. Extrapolated over a full year, these increases would be 5.7% and 7.7%, respectively — much higher than the roughly 2% year-over-year increase in the overall consumer price index. In other words, says Emrath, "the data show that builders' labor and especially subcontractor costs are rising faster than general inflation."

Subcontracting accounts for most work in residential construction. On average, single-family builders employ 25 trades when building a house. More than half of all builders subcontract at least 75% of the construction work, the NAHB says, and more than 95% always contract out some jobs, particularly the heating and air conditioning work. Builders were specifically asked about 12 trades in the recent survey, and 63% reported a dearth of rough carpenters, who build the supports and temporary forms used on the construction site. But well over half the builders reported shortages in all three "hammer and saw" categories: rough carpentry, framing and finish carpentry. Not all builders reported shortages. Indeed, several responded explicitly that there were no shortages in their respective areas. But averaged across all 12 trades, 41% of builders reported some or serious labor issues. That's up sharply from 28% last year and 20% in 2012. The other nine trades builders were queried about were bricklayers, plumbers, painters, roofers, electricians, weatherization workers, excavators, building maintenance managers and professionals who handle heating, ventilation and air conditioning systems. So what can buyers do? Little, except be patient. It's not that your builder doesn't care, or doesn't want to do right by you or their other customers. They do. But most subs and suppliers worth anything are extremely busy. Most builders require that the subcontractor who did the original work follow up on callbacks. Not the same tradesmen, perhaps, but the same company. So if the sub is having difficulty finding good-quality workers in the first place, they will have even more trouble finding the time to double back to make repairs. Large builders often send their own maintenance crews to handle callbacks, so they should be able to take care of those issues more expeditiously. But if the number of callbacks are on the rise, they, too, will have a hard time keeping up. So try to remain rational and realistic. Separate the emergencies from the non-emergencies. And again, be patient.

Survivor: 'I was so scared' in tornado that killed 2 at campground