A Beacon of Hope for the Roofing Market (IN, GA, FL, MN, MO) 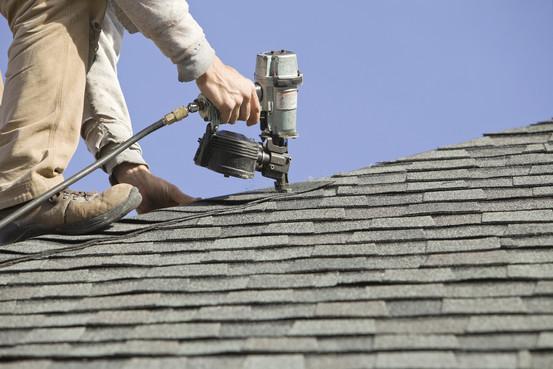 Beacon is the No. 2 distributor in the $20 billion roofing industry. Photo: BanksPhotos/Getty Images

Trey Grooms, an analyst at Stephens, thinks improving demand could help lift earnings 38%, to $1.73, in fiscal 2015, which begins this week, on a 5% rise in revenue. Even at those levels, he notes, earnings are depressed, well below true earnings power of $2.50 to $3 a share. As earnings head up, Beacon's shares could jump 40%, to $35. BEACON TRACES ITS ROOTSto the Beacon Sales Co., a Massachusetts-based roofing distributor, founded in 1928. Starting around 1990, Beacon grew by rolling up smaller distributors. The company went public in 2004. This is a consolidating industry. The five largest distributors dominate the roofing market, with 50% of the business. The rest is highly fragmented among small regional players. Beacon operates 254 branches in 40 states and Canada. The company buys roofing products from big manufacturers, like Owens Corning, Johns Manville, and Mid-States Asphalt, and sells them to over 40,000 contractors, builders, and building owners. Beacon carries products for both residential and nonresidential roofing, including asphalt shingles, wood shingles, and single-ply roofing, as well as complementary building products like vinyl siding, windows, and doors. Asphalt shingles are its single largest product. Residential roofing accounts for about half of sales. In fiscal 2014, Beacon is expected to earn $62 million, or $1.25 a share, on revenue of $2.3 billion. U.S. roofing is about a $20 billion annual market. More than 80% of expenditures are for reroofing projects. While a faulty roof can't be put off for long, homeowners have been known to procrastinate. Roofing repairs for offices and commercial buildings tend to be addressed quicker. 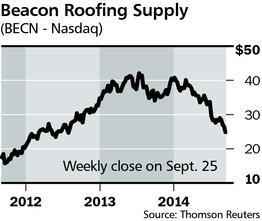 So while the residential side has been weak, demand for nonresidential roofing has been a pocket of strength for Beacon. In the June quarter, commercial roofing sales, excluding new branches, rose 9.7% from the year-earlier period. Complementary products were up 6.4%. Residential sales, by contrast, grew by only 2.7% in the quarter. Looking out over the past nine months, residential sales slumped 2.3%, compared with the same period in fiscal 2013, while the other categories logged gains. Pricing has been weak across the board, a result of weak demand and heavy competition among distributors. Overall, Beacon's pricing fell 2.6% in the quarter from a year ago.

Management has worked to counter the weak pricing by reducing product costs, and that has helped alleviate some of the pressures. Still, gross profit margins in the quarter fell to 22.7% from 23.5% a year earlier. On the Aug. 8 earnings call, CEO Paul Isabella commented that gross margins could improve in the fourth quarter, which ends on Sept. 30, with a "pickup in residential demand." In July, Beacon saw signs of improving demand, as sales notched gains over June. Analyst Grooms of Stephens believes that gross margins will improve to 23.3% in fiscal 2015, reflecting improved demand. Said Isabella of the industry: "We do feel overall, though, that we're in a trough. Not that we're going to springboard out of the trough, but we think there are signs across our regions that gross margins are stabilizing and will increase slightly." The company couldn't be reached for comment. Overall, Beacon's sales grew 6% year over year in the quarter. Much of the growth was driven by its strategy of opening new branch offices. Through July, the company opened 22 new offices, and plans 25 in total for the year and another 20 in 2015. Acquisitions are another large opportunity. Beacon has a long history of successfully integrating smaller distributors, having done about 25 deals over the past 10 years. Armed with a healthy balance sheet, management sounds intent on continuing the momentum. Isabella noted on the recent call that "our [acquisition] pipeline is more robust than it has been for a long time," and "the discussions we're having are more robust than they've been for a long time." Consolidation will improve the industry's prospects, taking out competition and leading to improved pricing. As one of the top players, that will be good for Beacon, too.