Possible snow for some of the Ohio Valley this week

Can a roof ever resist a tornado? 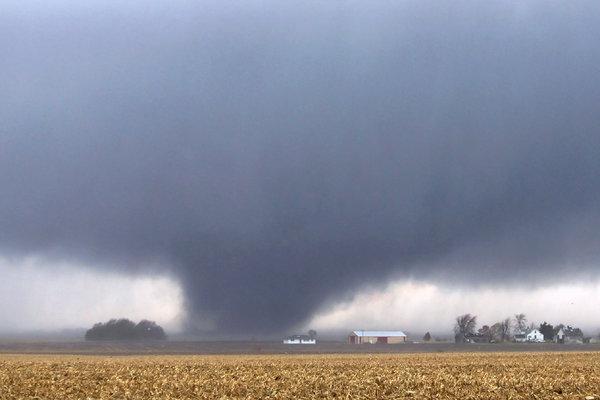 Weather officials could not confirm the exact number of tornadoes that hit the Midwest this past Sunday. The New York Times reported that as of Sunday evening, the National Weather Service website listed 77, most of them in Illinois, but cited cautions that there may have been multiple reports on the same storm.
According to reports, the town of Washington, Ill., 145 miles southwest of Chicago, was one of the hardest hit. Such tragedy perennially provokes questions for building professionals of all stripes: How can I build to resist getting blown away? Tornadoes are not like hurricanes; they pack a stronger, more concentrated punch. Many engineers agree there's no affordable way to build against an EF-3, EF-4, or EF-5 tornado.
In these cases, the only safe protection from a tornado's deadly wallop is a safe room, a fortified room within or under a home specifically designed to resist the extreme forces imposed by tornado winds.  But this does not mean that nothing should be done to protect a home. The way a tornado winds through a populated community, the full force of the storm is incredibly localized, and the majority of the community will see much milder winds--enough of a difference in wind velocity that hold-downs could help spare most buildings ... and their occupants. For holding the roof on, no roof covering will do the trick. It's all about the framing hold-downs that connect the roof structure to the walls. This is work that can be done at the time of a roof replacement. But the load path must be completed all the way to the foundation, so a complete job will typically require much more than just hold-downs near the roof.