Massachusetts properties are struggling under heavy layers of snow, leading to the collapse of more than 200 roofs since Feb. 9. The total includes the collapse of a large industrial complex in Boston's Hyde Park. Heavy layers of snow caused some 20 roof collapses across the state Wednesday, including a major failure at a large industrial complex in Hyde Park. The latest collapses brought the total since Feb. 9 to around 210, officials said. On the warmest day in weeks, deep piles of snow weighing down roofs got even heavier, officials said. The wet, heavy snow that fell overnight added to the burden. State officials said reports of collapses have increased sharply in recent days. The collapse at the Boston-Dedham Commerce Park on Sprague Street in Hyde Park blew out a cinderblock wall, toppled several power lines, and filled the neighborhood with the smell of natural gas. As crews rushed to turn off the utilities, broken pipes unleashed a torrent of water from inside the building. 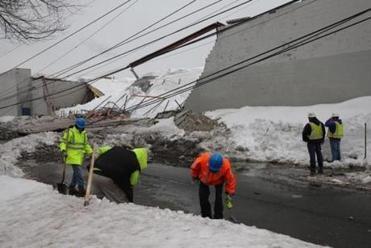 Two major roof collapses were reported in Boston this morning as structures around the region continue to fail due to the snow pack.

“It looked like a bomb went off,’’ Joseph Finn, Boston’s fire commissioner, said as he surveyed the damage.No one was injured in the collapse. Another building in the complex was also evacuated because of roof concerns.