The USTA invites the media to watch Wednesday as the final piece of steel in the superstructure that will support the retractable roof over Arthur Ashe Stadium is put into place.

The USTA National Tennis Center in Flushing Meadows is big, and only getting bigger. There is a manifest destiny about the place, which soon enough will be insured for rain. The freshly completed superstructure that will house a towering, retractable roof was unveiled on Wednesday. It is enormous — 1,700 beams composed from 5,000 tons of steel — and that grand scale should come as no surprise. Ashe Stadium, gaping below, is monstrous in its own right, a giant cash register that seats 23,771. “You could drop the entire Centre Court at Wimbledon through our roof opening,” boasted Gordon Smith, USTA chief operating officer, during a viewing party Wednesday for the ongoing construction. “They’re my best friends over there. I’m just pointing out facts.” The USTA has never cared much about coziness, and the outsized roof underlines that notion. The translucent, plastic material that completes the roof will not be in place until the 2016 U.S. Open. By then, there will also be a new, larger grandstand and an expanded campus with enough room for a new alleyway and food court. By 2018, the old Armstrong Stadium will be demolished to make way for a new, larger edition, built to be roof-ready in the not too distant future. 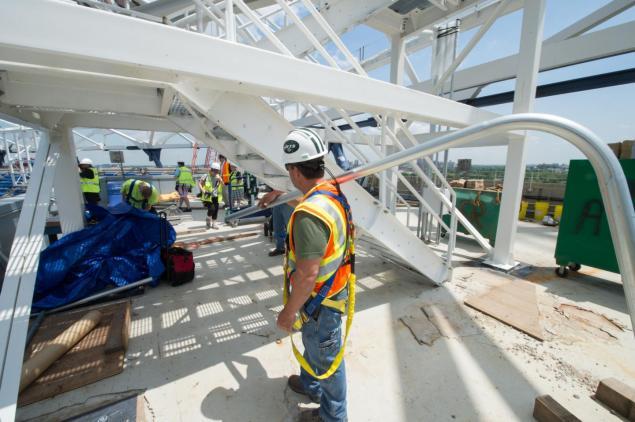 Construction workers are seen on Wednesday as the final piece of steel is put in place.

For now, all construction is on target, despite a brutal winter that forced the importation of a third, hulking crane to assure on-schedule work. The stadium was not originally built with a roof in mind, but a study showed that it would be cheaper to jerry-rig a new top than to spend $1 billion to erase the place and start from scratch. Smith estimated that Ashe Stadium would be good now for another 35 years, at least. “Armstrong was built for the 1964 World’s Fair, and it’s still in use,” Smith said. 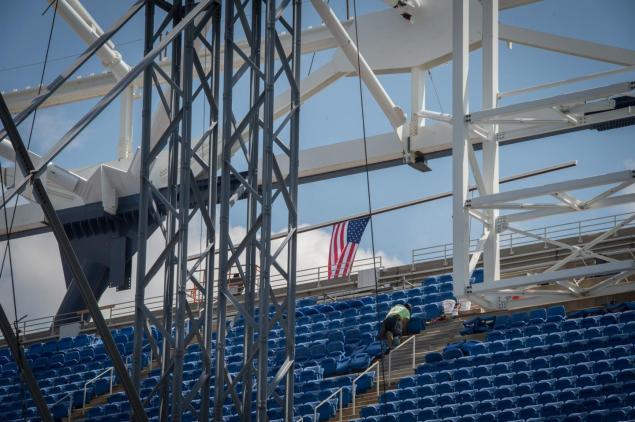 The USTA says the roof won't be fully complete until the 2016 U.S. Open.

The USTA is doing all these ambitious renovations for a number of reasons, including money: The expansion plans will allow up to an additional 10,000 fans into the Tennis Center during each of the first nine days of tournaments, creating more revenue; it will guarantee live coverage for ESPN (beginning an 11-year deal) and future broadcasters, even under stormy conditions; and, such improvements are necessary in order to keep up with Wimbledon and the Australian Open. It is no great secret that the U.S. Open has fallen far behind those two majors when it comes to infrastructure, let alone charm. Wimbledon is constructing a roof over a second court, while there are three covered stadiums in Melbourne. Wimbledon, still absent all the garish advertisements, recently expanded and upgraded media facilities that already shamed the USTA. Given such unfavorable comparisons, Smith pointed out that his roof will require only five to seven minutes to close, while Wimbledon’s needs about 20 — including the time required for humidifying the atmosphere. 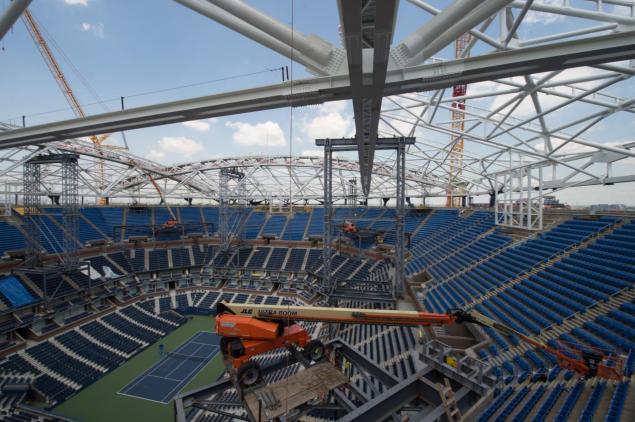 The National Tennis Center in Queens is a giant construction site right now, but USTA officials say the construction will not impact the 2015 U.S. Open this summer.

The price of all this stuff in Flushing Meadows remains on budget — about $500 million — not counting the Armstrong roof that will surely arrive with time. The improvements are privately funded through bank bonds to be paid back from ticket and broadcasting revenues earned by the non-profit, private USTA. The center is pushing out its southern borders a bit, by less than an acre into the surrounding parkland, and so the USTA has agreed to pay more rent on its lease with the city. With just two months to go until the 2015 Open, the National Tennis Center is currently a terrible construction mess, torn up from the inside out. But Smith and Danny Zausner, COO of the Tennis Center, both insist everything will be ready by the time players show up for the Open on Aug. 20. A temporary plastic shield will be erected above parts of Ashe so that shadows from the roof structure do not create helter-skelter patterns on the court. The past seven Opens were either rain-delayed or they were scheduled for an extra day, all ending on a third Monday. This next one is supposed to end earlier, on the second Sunday. There will be no plastic roof in place quite yet, however, so some dark clouds might have something to say about that.

Roof work, repairs on Palace of Westminster to cost $4.66B