Roof work, repairs on Palace of Westminster to cost $4.66B 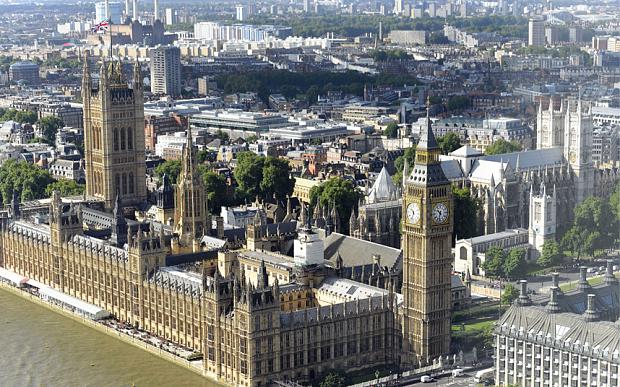 The Houses of Parliament need a fundamental overhaul  Photo: Rex

When discussing his plan to cut the Budget deficit, George Osborne is fond of boasting that he is “fixing the roof” of the economy “while the sun shines

The Chancellor may soon be asked to find another £3 billion to fix the roof, pipework and crumbling Victorian masonry of the Palace of Westminster itself, which is falling into potentially terminal disrepair. A senior official is warning that Parliament could be completely destroyed by fire because it would not withstand the kind of blaze that better-protected historic buildings, fitted with safety features, would survive.
Richard Ware, director of Parliament's renewal and restoration programme, described the 160 year-old Palace of Westminster as “not fit for purpose” as a modern visitor attraction, and a workplace for more than 2,000 people.
This week, MPs and peers will be presented with a series of options for restoring the neo-Gothic Palace, including a radical plan to move MPs and peers out and hold debates elsewhere while major works take place.
A report to be published on Thursday will set out the cost of various options for restoring the Parliamentary estate. Experts have said the price could run to £3 billion, a sum likely to be met with consternation by taxpayer campaigns. But Dr Ware warned that delaying the renovations would mean the leaking roof, cracked stonework, pre-War wiring, and worn pipes would deteriorate further, with potentially catastrophic consequences. “The roof leaks already – badly - because the cast iron sections’ support struts began to rust a long time ago,” he said. “It takes years to replace the whole thing and there are some roof sections which would be very disruptive to start replacing with people underneath. “Then there is the question of fire. We don’t want to scaremonger about that - we are absolutely safe and compliant on human life,” Dr Ware said. “But we don’t have the kind of fire containment – ‘compartmentation’ – that is normally recommended for historic buildings. What that means is that if a fire ever took hold, we would get everybody out but we couldn’t necessarily be sure of saving the building. That is a big one.”
The Houses of Parliament have survived, with running repairs, German bombing during the Second World War, and terrorist attack. But the demand from MPs to be able to return, even during the long summer recess, for an emergency debate with 48 hours’ notice means there has been limited opportunity to carry out the necessary overhaul to the fabric of the building. “We haven’t ever had a fundamental renovation of the building,” Dr Ware, who is a politically neutral official, and not an elected politician, said. “It has always been patched. We have had lots of bits added, a few bits taken away, but never an opportunity to really get into the infrastructure – the pipework, the heating, cooling, waste-water. The whole lot is seriously ‘end of life’.” “The root of that problem is that since they reopened the Commons chamber in 1950, there has effectively been no downtime because the Houses have been sitting.” Wheelchair access in some areas, facilities and routes for more than one million visitors each year, including 40,000 school children, are “not really fit for purpose” he said. “There is always work going on but it is never enough to keep pace with the rate of obsolescence.
Given that a lot of the building is Victorian, and even that stuff that was put in after the war is 65 years old and by the time we get started on a major renovation, it will be 70 years old, and you just can’t run on like that. The risks go up and up and the costs of maintaining it.” The report is likely to identify nine scenarios, ranging from doing the bare minimum in terms of restoration work to a complete overhaul which would require all MPs and peers to vacate Parliament at the same time. Four of the options are likely to be dismissed as unviable, with further details given on the potential costs and practicalities for the remaining five. The option of moving politicians out of Parliament temporarily is expected to remain on the table. Dr Ware said: “The idea of moving parliament out permanently was ruled out. We haven’t worked out if we had a temporary outage, we can’t say exactly where that would be. There won’t be a lot of detailed commentary on that. “In principle it is feasible but the further you have to go from where the other parliamentary buildings are and government buildings, like Downing Street, the more difficult it becomes to have a responsive relationship between parliament and government, which is pretty central to the way we do things.”
The three main courses of action considered by the report are doing the bare minimum; taking a “medium” approach to maintenance; and making significant improvements. The report will also set out three different methods of tackling the work, including keeping politicians in the buildings while work is gradually carried out. Other options will include a “half and half” approach, with one of the two Houses moving out while work is completed, before the other House is taken out of action. A joint committee of MPs and peers is expected to be set up within weeks to examine the detail of the report, before returning early next year with a recommendation on which plan to take forward. MPs and peers will then vote on whether to accept the plan, with potentially major consequences for taxpayers’ money – and their own daily working lives.