Roof Design Contributes to the Buildup of Ice Dams 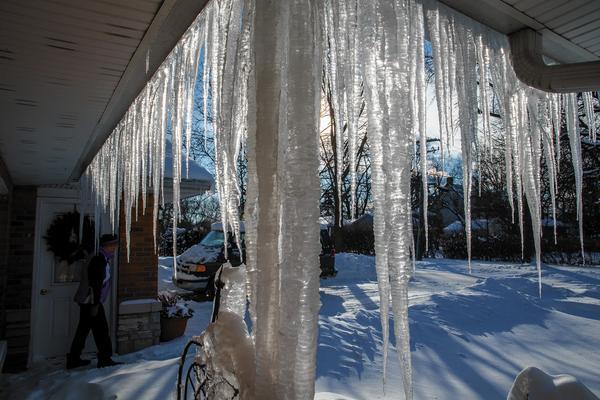 Ice that builds up on the roofs of homes from melting snow can cause damming that can damage gutters and roofs and send water into houses. (Zbigniew Bzdak, Chicago Tribune / January 6, 2014)

"Instead of me worrying about it, I'll just get the professionals over here," said Susick, 51, of Arlington Heights. "At least this way, it gives me peace of mind."   Ice dams have been forming on Chicago-area roofs since heavy snow and extreme cold hit. But the buildup of ice could create headaches for homeowners as this weekend's temperatures climb and quickly melt the mix of ice and snow, experts say.   The problem starts with poor attic insulation and ventilation. That allows heat to escape and turn the bottom layer of rooftop snow into water that slides to the edges of roofs and refreezes, forming a layer of ice.  As the snow continues to melt, the ice stacks up until a blockage forms. Having nowhere else to go, the water backs up under the shingles and can leak into the house.   The ice dams can destroy roofs and gutters. They also can stain walls and cause ceilings to collapse.

Mimi Mesirow knows the damage all too well. She remembers returning to her south suburban home from a weeklong vacation about 15 years ago and discovering that an ice dam on her roof caused water to penetrate her home. One of the rooms in the attic was destroyed.   "We haven't had that problem since, but it was unsettling," said Mesirow, 59, adding that the roof was replaced and the damage, which was covered by insurance, cost almost $10,000 to repair. "We couldn't even (use) the lights in there. There was so much water."

It's hard to pinpoint how many homeowners and what regions are prone to ice damming because the condition depends on a number of factors, including the roof's design and the building's construction, said Joan Crowe, director of technical services for the National Roofing Contractors Association.

Homeowners should not try to break the ice dam for safety reasons. Poking at the roof with sharp objects could create holes in the roofing system, Crowe said.   "It's a solid chunk of ice; it's hard to break it up anyway," she said.   If people use extreme caution, removing snow from the roof or chipping out channels in the ice dam with a roof rake can help, experts said. Newer homes often have an ice and water shield along the gutter edge that prevents ice from forming.

During the winter, homeowners should also pay attention to humidity levels in the home, said Bill Vanni, owner of Libertyville-based Structural Design Corp.   Many people like to turn up the humidity during the winter, which can cause moisture, and in some cases mold, to accumulate on the roof. High humidity levels can also cause ice to build up inside electrical panels.   "It all comes down to insulation," Vanni said. "The colder the climate, the more work you have to do to make sure you're better insulated."   Some Chicago-area roofing companies said phones will ring later this week, once the temperature rises.   "We're thinking definitely after the thaw we might get a lot more calls for ice dams," said Giuseppe Del Core, a repair specialist at Peterson Roofing Inc. in Mount Prospect. "People are just worried."